Mute City (ミュートシティ, Mute City[?]) is a heavily populated fictional city on Earth in the F-Zero series. Its original name was Mutant City[1] from which the current name is abbreviated.[2] In the television anime, F-Zero: GP Legend, Mute City was formerly known as New York.[3] In F-Zero GX, Mute City is known as a "Metropolis in the Heart of the Space Federation" and the information link for the entire universe. It is also regarded as the most advanced and sophisticated city in the universe.[2] This city is the most famous stop on the F-Zero Grand Prix and has courses in almost every F-Zero game to date. The only exception being that of the Game Boy Advance game, F-Zero: Maximum Velocity, where it was replaced by Bianca City. A large deposit of pure titanium was discovered at Bianca City forty years prior to its events. As a result, the village became a boomtown overnight. As it grew, it gradually replaced Mute City as the center of economic, political, and cultural activity in the galaxy.[4]

The over one billion people living in Mute City consist of all kinds of sentient life. A brand new Mute City circuit was just recently constructed in F-Zero GX because the old circuit became too worn and dangerous.[5] 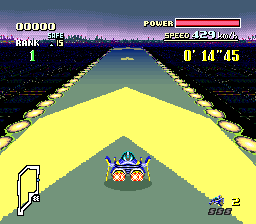 F-Zero GX has three Mute City tracks. Twist Road is very similar to Mute City 1 from F-Zero X. Serial Gaps is a much harder course with lots of opportunities to fall off course. Sonic Oval is a simplistic oval with many booster pads. Mute City also appears in the story mode. 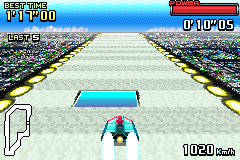 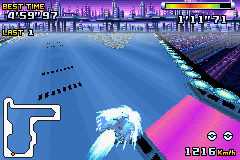 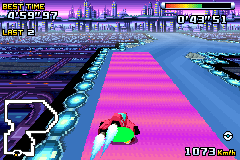 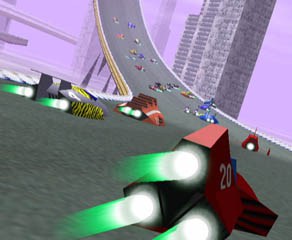 Mute City appears as a stage in Super Smash Bros. Melee, using modern-day graphics, where a single flat platform will carry all fighters to various parts of the Mute City track. Each part of Mute City's track has a different arrangement of platforms, and sometimes even pink panels that cause characters to skid. While fighting on top of the moving platform, it is possible to land on the road of the course. However, this will damage the character, and knock them upwards. F-Zero racers will drive over the course, including the Blue Falcon itself, whether Captain Falcon is fighting or not. If the vehicles make contact with a character, the character will be launched upwards after taking damage. However, the vehicles can also be retired after sustaining enough damage from attacks.

Although a stage does not exist in Super Smash Bros. Brawl, there is a stage called Port Town Aero Dive that uses a remix version of Mute City theme as a possible audio track that plays during fighting.

A completely different Mute City stage appears in Super Smash Bros. for Nintendo 3DS. Unlike the previous Mute City stage, this takes a more 16-bit approach to its art style, trying to replicate the appearance of the original F-Zero game. Characters now fight on top of the Blue Falcon, and two additional platforms to each side. The Blue Falcon will be racing through the original Mute City course, though this makes no difference to the layout of the stage as the race progresses. If a character lands on the road itself, they will be knocked upwards.

In Mario Kart 8, there is DLC for a track inspired by Mute City, complete with references to F-Zero X mainly.

Names in other languages