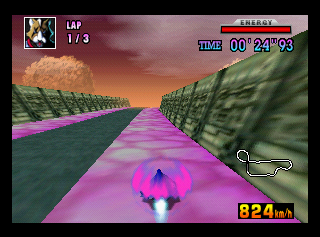 Racing on Devil's Forest Up and Down in Time Attack mode using Space Angler.

Time Attack is a playing mode first featured in F-Zero X that challenges the player to complete a track in the fastest time possible. After the first time around the player can challenge the Time Attack again but can also race against a "Staff Ghost", which is a recording of the player during their first time on Time Attack and each time a new record is broken the player can race against a staff ghost of their last run through. In F-Zero GX, the final challenge in the game's storyline requires that Captain Falcon race against three beings claiming to be the creators of the world (whether or not this is true is never fully confirmed), they will race Captain Falcon as his own staff ghost.

In F-Zero and F-Zero: Maximum Velocity, Training and Practice act as the Time Attack mode.