Red Canyon is a location in the F-Zero games. It is notorious for being the favored location of Samurai Goroh and his gang. According to F-Zero: GP Legend, this planet is the site of many space pirate ambushes and is the least safe F-Zero venue.

In F-Zero, Red Canyon appears twice in the game.

Red Canyon I is a rather long course with three jump pads, and is the third track in the Queen Cup.

Red Canyon II appears as the fourth course in the King Cup, being the fourteenth track in total. It is a longer version of Red Canyon I, and also has mines and a shortcut.

Multi Jump is a rectangular track with, as the name implies, 8 small jumps, which makes it easy to fall and lose a machine. There are high walls around everywhere except the final stretch, and speed pads before almost every jump. It is the second track in the Queen Cup.

Slim Line is a very narrow and winding course, with guardrails around the entire track that make it easy to explode, forcing the player to boost sparingly. It is the fourth course in the King Cup.

In F-Zero GX, Red Canyon is featured as the second mission of the game's story mode titled Goroh: The Vengeful Samurai. While pursuing Black Shadow, Captain Falcon travels through the canyon, but is stopped by Samurai Goroh and challenged to a race. This is the track's only appearance in the game. 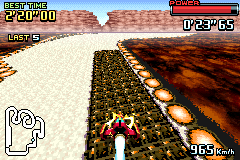 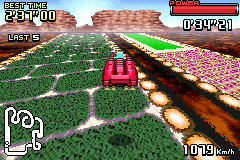 Red Canyon: Junction is the second track in the Bronze Cup. Junction has two paths at the beginning of the race. The path on the right has a Dash Zone which leads to a Green Zone. The other is a round path with a Jump Plate that sends machines over the other path. Red Canyon: Peak Jump has multiple rounded corners that are hard to turn on. Red Canyon: Peak Jump is the last track on Gold Cup, but may sometimes be switched with Illusion: Abyss Drop. Red Canyon from the first game returns as the fifth track in Platinum Cup. Red Canyon: Seven-Corner Speedway is only accessible in Captain Falcon's and Samurai Goroh's third Story Mode missions. 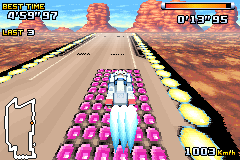