Samurai Goroh (サムライ ゴロー, Samurai Gorō[?]) is the pilot of the Fire Stingray and Super Stingray, and a recurring playable character in the F-Zero series.

Samurai Goroh is a space bandit of uncertain origin (though he is rumored to be of Japanese-American descent)[1] who leads a notorious gang of thieves. This gang calls Red Canyon their home, and it's their presence in part that makes the venue so treacherous and infamous. Much of his life, including his true name, is shrouded in mystery. Nevertheless, he is known as an infamous bounty hunter, and further recognized for the intense rivalry he harbors with fellow bounty hunter Captain Falcon – a rivalry that often ends in victory for Falcon, much to Goroh's chagrin. Samurai Goroh masterfully wields a katana, and also has a son named Daigoroh.

Though a notorious scoundrel of a man, Samurai Goroh is hearty and larger-than-life. He takes immense pride in himself and his status both as a bounty hunter and F-Zero pilot – and in his F-Zero TV interview, can often be heard referring to himself in the third person. He has a strong hatred for Captain Falcon, seeing the captain's victories as illegitimate robberies of his own; in fact, his perfect attendance record at the F-Zero Grand Prix could be entirely out of spite for Falcon. Goroh has made his own fair share of enemies over his career, however, most notably his former right-hand man Antonio Guster, who Goroh let fall into the hands of authorities. 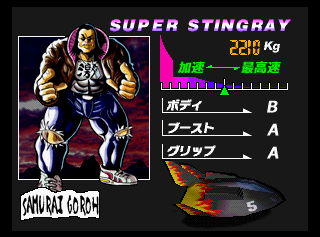 Samurai Goroh with the Super Stingray as seen in the F-Zero X Expansion Kit.

Samurai Goroh is a tall, stocky human of tan complexion, instantly recognizable for his broad face, permanent scowl, and dark, circular-rimmed shades obscuring his eyes. F-Zero depicts him as rotund, but he has since been seen with enormous, rippling muscles (although Daigoroh still refers to him as "fat"). Goroh wears a brown aviator hat (purple in F-Zero) with a white ridge on its forehead that has a bright red starburst design on it which highly resembles the Japanese Rising Sun Flag, perhaps a symbol of his heritage. He wears a brown sleeveless vest with a prominent collar, and under that, a white T-shirt with the sleeves ripped off, with the Kanji character 激 (meaning "to incite/stimulate" as a verb, or "sharp/violent" as an adjective) printed in black on its center. In the anime, the kanji on his shirt is 刀, which is the kanji for "katana". From F-Zero X onwards, he wears white bandages wrapped around his forearms. Prior to F-Zero GX, he carries his katana's scabbard on his right hip. It is yellow in F-Zero, but the color is indeterminate in X. He wears baggy pants with a cloth sash tied through them in a knot as a belt, though the color of both of these articles have changed in every game since his debut (yellow pants with white sash in F-Zero, light blue pants with orange sash in X, and navy pants with yellow sash in GX). Finally, he wears heavy, dark green boots, though they are silver in X, and he wears black shoes resembling tabi in the original F-Zero.

In F-Zero X Expansion Kit, Samurai Goroh has a different outfit when piloting the Super Stingray. He retains his T-shirt and shades from before, but the absence of his hat reveals neck-length straight black hair that he combs backwards, revealing a prominent widow's peak. He wears a dark brown leather jacket with a popped collar that reveals a hot pink interior, together with blue jeans ripped at the knees and white sneakers with yellow and red designs.

Samurai Goroh and the Fire Stingray have appeared in every F-Zero game with the exception of F-Zero: Maximum Velocity, and Goroh's status as a rival to protagonist Captain Falcon has made him altogether one of the most prominent characters in the series.

As with fellow series veterans Captain Falcon, Pico, and Dr. Stewart, Samurai Goroh is never seen outside of his machine in-game in F-Zero, although he does appear in the manual and its enclosed comic book. In this comic, Captain Falcon is seen chasing a murderer by the name of Scale Head to a rocky area resembling Red Canyon and shooting him. When Captain Falcon moves to make off with the corpse, Samurai Goroh appears with his gang at his back and threatens Captain Falcon with his katana, warning him to step back. Before Goroh can steal the bounty, he and his gang are caught off-guard when Falcon suddenly calls in the Falcon Flyer, which he uses to make his getaway while Goroh swears revenge at the Grand Prix.

Samurai Goroh reappears, making his first story-based appearance in a video game, in the Story mode of F-Zero GX. He appears in its second chapter, entitled Goroh: The Vengeful Samurai. Captain Falcon is seen patrolling Red Canyon in search of another bounty, when he is ambushed again by Samurai Goroh and his gang. Out for revenge, Goroh accuses Falcon of "[stealing] the prize money from [them] last time", possibly in reference to the aforementioned incident with Scale Head's bounty, and challenges Falcon to a high-stakes race for a distant checkpoint where the loser forfeits their machine. After a hazardous race against a rockslide, Falcon comes out on top, and, again, Goroh swears to get back at Falcon at the Grand Prix.

Samurai Goroh is also one of eight pilots to have his own path in the Story mode of F-Zero: GP Legend.

Samurai Goroh appears together with the Fire Stingray as a collectible trophy in all Super Smash Bros. games since Melee, with the exception of Ultimate, in which the two appear as a spirit. From Brawl onwards, he also appears as one of several characters summonable by the Assist Trophy item; when summoned, he runs around and attacks indiscriminately with his katana.