The leader of the Zolorkian Coalition from planet Uma-41, Zoda (ゾーダ, zōda?) has been at the forefront of many attacks on Earth. It was his plan to set up a Zolorkian government on Earth and use the planet for refueling, mining and gambling. Because of this, Zoda is in a long dispute with the hero of justice, Super Arrow. He has also been marked by Captain Falcon and once was almost captured for his bounty. Zoda’s crazed tendencies comes from a machine that pumps adrenaline and dopamine into his body. He enters the Grand Prix races to raise funding for his sinister plots and during this latest race, he plans to take out anyone who dares interfere with his master plan.

At this time the F-Zero races were discontinued due to the Horrific Grand Finale and most of the racers went into the underground to keep the sport alive. The racers supported a strict code to adhere to F-Zero rules and regulations, despite the lack of any officials from the game. Zoda, who joined in the races during his scouting, was one of the underground racers to break this code.

Zoda modified his F-Zero machine beyond the F-Zero formula to give himself an unfair advantage over the other drivers. The result of this made the machine also unsafe so that one day when his machine overturned, two other racers were killed in the accident. The same day, Captain Falcon rounded up 26 of Zoda's men and turned them in for a bounty. Zoda was able to escape, but swore revenge on Captain Falcon and the Arrows. He plans to eliminate them in the Death Race. 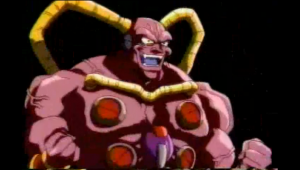 In the anime-based games, Zoda's backstory is drastically different. In the year 2051, he was a criminal being chased by detective Rick Wheeler. He caused Rick Wheeler to be in a devastating accident that caused him to be put in stasis for 150 years. What became of Zoda afterwards is unknown, but he was later revived by Black Shadow as his second-in-command of the Dark Million.

During the saga of the Reactor Mite, Zoda evolved to a new form and became Hyper Zoda.

Zoda makes an appearance as a trophy.