F-Zero: Maximum Velocity (F-ZERO FOR GAMEBOY ADVANCE, Efuzero fō gēmubōi adobansu?, F-ZERO FOR GAMEBOY ADVANCE) is a futuristic racing game for Game Boy Advance. It allows for competition against simulated opponents or human opponents. The game was released as a launch game for the system, on March 21, 2001 in Japan, June 10, 2001 in North America and across Europe on June 22, 2001. Every Race consists of 5 laps around a race track. The race will end prematurely if the player land outside of the track after a jump, destroys their car by depleting its energy, or completes a race in too low of a rank; all of these conditions necessitate the player using an extra life (if available in the Grand Prix) to try again.

At the the end of every lap the player is giving one boost. This boost may be used at any time during a game by pressing both shoulder buttons at the same time. A boost will dramatically increase a players speed, but will decrease their ability to turn. A boost used before a jump will make the player jump farther, allowing the player to use a shortcut.

The Grand Prix is the main single player component of Maximum Velocity. It consists of 4 (1 hidden) series each containing 5 races. The player needs to be in the top 3 at the end of the last lap in order to continue to the next race. If the player is unable to continue, the player will lose a life and can try the race again. If the player runs out of lives, then the game ends, and the player has to start the series from the beginning.

The Grand Prix are as followed:

Training is the practice mode. 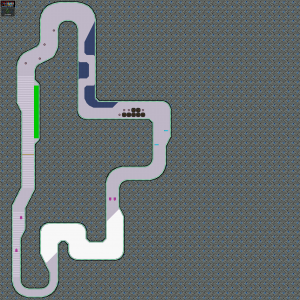 Championship is another single player component. Player runs special course and compete total time. This special course is not selectable at Multi Cart vs., but can compete with other player by link each player.

MV can be played in 2 multiplayer modes using the Game Boy Advanced link cable, with one cart, or one cart per player. 2-4 Players can play in both modes.

This game features new characters and it is the only game without Captain Falcon, Dr. Stewart, Pico, and Samurai Goroh. However, there is a pilot named Kent Akechi, who claims to be the son of Captain Falcon, and his vehicle is the Blue Falcon MK2, which resembles the original. In addition, a vehicle known as the Silver Thunder is built by Dr. Stewart.

In F-Zero: Maximum Velocity, vehicle stats work a bit differently than other installments. When selecting a vehicle, it will show the car, the name, and an assortment of different statistics regarding the vehicle.

In single cart, only one player needs to have a cartridge. The other players will boot off of the link cable network from the player with the cart using the GBA's netboot capability. All players drive a generic car, and the game can only be played on one level, Silence.

In multi cart, each player needs to have a cartridge to play. This has many advantages over single cart:

In December 2011, Maximum Velocity was re-released on Nintendo 3DS. This exact port of the game could be downloaded for free if one was a member of the Nintendo 3DS Ambassador Programme. This release went alongside 9 other Game Boy Advance games, and 10 NES games. Unlike the NES games, this title will not be made available outside of the Ambassador Programme, making the re-release exclusive to 3DS Ambassadors.