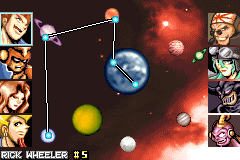 The story mode in F-Zero: GP Legend has intertwining segments between eight of the playable characters: Rick Wheeler, Captain Falcon, Jody Summer, Jack Levin, Samurai Goroh, Lisa Brilliant, Black Shadow, and Zoda. Each pilot has five chapters each, with an optional one for Rick and Captain Falcon if certain requirements are met, earning cash by completing objectives. The player initially starts with only Rick Wheeler's storyline, with other characters opening upon meeting them in missions. Each pilot can earn up to $2.55 billion. Completing story lines and maxing out earnings unlocks various machines[1].

The timeline for F-Zero: GP Legend's story is unclear, as several character events are either isolated from or conflict with other characters, which means some events can happen at several possible time periods or at the same time. Additionally, due to the order most events need to be in, alternate perspectives between characters, and differing routes, the episodes may not line up with each other properly. Below is an example of a possible timeline based on points where pivotal characters interact with each other.

Captain Falcon catches up to Dr. Clash right when Zoda comes to kidnap him, which happens at the end of Captain Falcon #1 and the start of Zoda #1. Meanwhile, Rick Wheeler chases down Octoman in Rick Wheeler #1. Elsewhere, Samurai Goroh gets poisoned in his vehicle in Samurai Goroh #1 and Black Shadow causes Lisa Brilliant to get in an accident during Lisa Brilliant #1 and Black Shadow #1.

Immediately after their race, Jody chases down Blood Falcon in Jody Summer #3, which Jack warns Rick about, prompting him to come rescue her. Meanwhile, Zoda trains in Fire Field during Zoda #4.