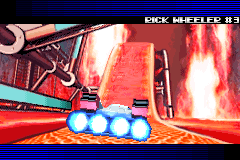 Captain Falcon begins by asking more about Rick's past. Rick explains he used to be a detective and was chasing after Zoda a hundred-fifty years ago. The two of them crashed in an unspecified incident and both awoke from a cold sleep in the current era. Afterward, Captain Falcon notes that Zoda will likely be attending the next Grand Prix, to which Rick immediately goes to register for at Fire Field.

Despite winning the Grand Prix race, Rick finds out that Zoda did not attend. While contemplating his next step, Rick gets a call from Jack Levin, who Rick makes fun of by nicknaming him "Margaret", exclaiming that Jody Summer has been abducted. Rick then heads to Port Town to find more information.

Map of the course

The objective of the mission is to win the race. The race takes place on Fire Field: Blast Track and there are sixteen participants, Rick starting in fourth. By avoiding the mines and timing their boost, the player will be able to gain the lead easily.