From F-Zero Wiki, the F-Zero encyclopedia
(Redirected from 64DD)
Jump to navigationJump to search

The Nintendo 64, released in 1996, is Nintendo's successor to the SNES. F-Zero X is the only game in the F-Zero series to be released on the system, though Captain Falcon made an appearance as an unlockable character in the crossover fighting game, Super Smash Bros., causing a significant increase in attention for the F-Zero series.

The Nintendo 64 was successful upon release and had many hit games, many of which were from Nintendo itself, such as F-Zero X, Super Mario 64, Super Smash Bros., Paper Mario, Star Fox 64 and The Legend of Zelda: Ocarina of Time. The N64 was also the first console to feature full 3D graphics, the first system to have a 64-bit processor and a 32-bit graphics chip, and it was arguably the first console to feature a practical analogue stick. Despite these innovations and its strong launch, the Nintendo 64 sold about 33 million units worldwide by the time it was discontinued in 2002, lagging behind the 49 million sold by its predecessor, the SNES. The drop in sales was attributed to Nintendo's controversial decision to remain with ROM cartridges instead of CD-ROMs, alongside the dominance of the Sony Playstation, which had been released 2 years earlier.

A variant of the Nintendo 64, the iQue Player, was released for Chinese markets in 2003. It essentially takes the form of a plug-and-play console in the form of a controller, with unique cartridges designed for it. F-Zero X was among several games released for this console.

Only one F-Zero game was released on the Nintendo 64, F-Zero X. Furthermore, Super Smash Bros. was also released on the console, notably featuring Captain Falcon as an unlockable character. 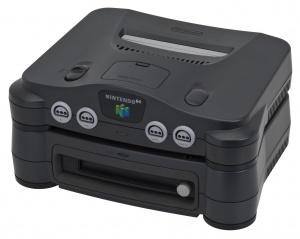 Nintendo 64 plugged into the 64DD.

The 64DD was a disk-based hardware add-on released for the Nintendo 64, released in 1999. Intended to address criticisms about the use of cartridges, the 64DD was a commercial failure upon release, only selling about 15,000 units in Japan before being discontinued altogether. Only 9 titles were released for the console, and many of the games in development for the add-on were either discontinued or published for other consoles.

Only one F-Zero game was released on the Nintendo 64DD, F-Zero X Expansion Kit.